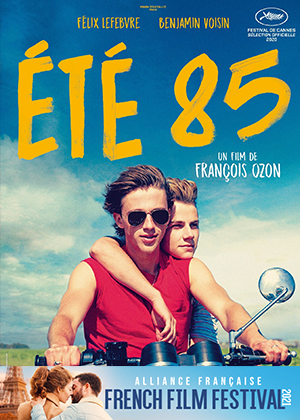 This Cannes-selected film by the prolific and eclectic French auteur François Ozon is a seductive and wild burst of 1980s nostalgia. Blending the sensuality of a Pedro Almodóvar film with the dark mystery of a Patricia Highsmith novel, Summer of 85 is France’s edgier answer to Call Me By Your Name.

Sitting in a police station, teenage boy Alexis (Félix Lefebvre) is asked to recount what happened to his ill-fated best friend David (Benjamin Voisin, Man Up!, AF FFF21). Told in flashback, Summer of 85 is a thrilling and hotblooded tale of Alexis’s infatuation with David, which went from friendship to love to obsession.

While Ozon is now known for recent hits such as By the Grace of God (AF FFF19), his adaptation of Aidan Chambers’s 1982 novel Dance on My Grave sees him recapturing the unashamedly queer sexual energy that characterised so many of his earlier films. Shot on 16mm and set to a soundtrack that features The Cure, Bananarama and Rod Stewart, Ozon embraces the retro look and tone of 1980s teen movies to weave a tale of teenage love, lust and tragedy.

"The sensual artfulness of classic Ozon, combined with the accessible vigour of an 80s American teen pic."