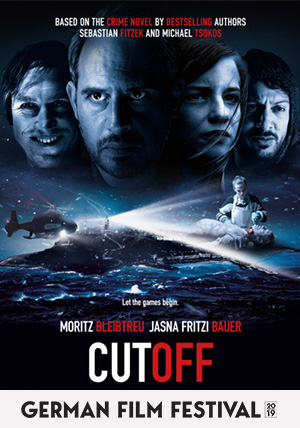 Set in spectacular locations with a stellar cast including Moritz Bleibtreu (The Baader Meinhof Complex, 2008), Lars Eidinger (Personal Shopper, 2016) and Jasna Fritzi Bauer (Barbara, 2012), genre expert Christian Alvart (Pandorum, 2009, Antibodies, 2005) helms this gripping thriller, reminiscent of the David Fincher’s 2005 neo-noir masterpiece Seven.
While performing the autopsy on a particularly gruesome murder victim, forensic scientist Paul Herzfeld (Bleibtreu) discovers a metal capsule in the skull. When Herzfeld calls the number contained within, he learns that his teenage daughter has been abducted. His only hope is Linda (Bauer), an artist who is trapped on a storm-ravaged island with the killer. Face-to-face with the second victim, only she can extract the key to save Paul’s daughter.
Based on the international best-seller by Sebastian Fitzek which sold over 12 million copies, this nerve-wracking psychothriller will keep audiences holding their breath and trembling with tension until the closing credits.