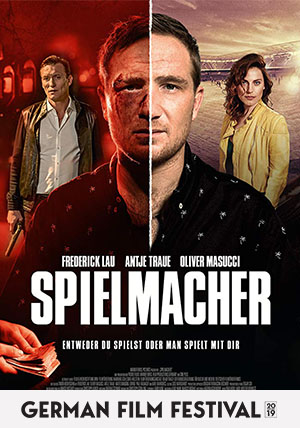 Ivo (Frederick Lau, also in The Captain) is a former pro footballer and jailbird with nothing to lose. He is a betting natural and his talent combined with his background attract the interest of Dejan (an unnerving Oliver Masucci), the leader of a dangerous underworld family. Dejan takes Ivo under his wing, quickly sucking him into the world of sports-betting and match-fixing. When Ivo meets young Lukas, a talented lad in whom he sees himself, he starts training him for a top team trial while also grooming and manipulating him on Dejan’s behalf. But when Ivo falls for Lukas’ mother, his loyalty is put to the test and he is forced to make the ultimate decision...

Celebrated actor Frederick Lau has won the German Film Award for his characters in Victoria (2015) and The Wave (2008). In Playmaker he delivers another electric lead performance which reinforces his talent, resulting in an exciting and enthralling thriller.