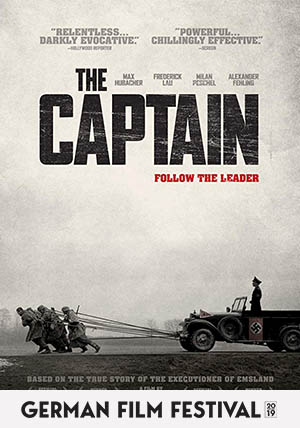 In a darkly evocative and brutally stark return to German cinema, Hollywood writer-director Robert Schwentke (The Time Traveler's Wife, 2009, RED, 2010) presents the arresting true tale of a wartime impostor which premiered at the Toronto Film Festival and won Best Cinematography at the San Sebastián Film Festival in 2017.

In the chaotic final weeks of World War II in Germany, 19-year-old private Willi Herold (a chilling Max Hubacher) joins countless others in risking execution as he deserts his rank. He makes a terrifying escape from his superiors into the bleak and barren moors of the Ems river estuary where half-starved and nearly frozen to death, he discovers the uniform of a Luftwaffe captain. Donning the outfit as his own, Herold assumes his new role with frightening precision. What follows unveils a shocking political satire that will challenge the audience’s notions of individuality and free will.