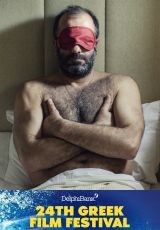 "An inspired, gorgeously photographed work of deadpan lunacy that asserts itself as a spit-take on masculine rivalries." The Village Voice

Continuing to fly the flag for Greek Weird Wave in the most brilliant of ways is filmmaker Athina Rachel Tsangari’s feminist portrait of men without women – a gentle, critical comedy that knows how far to push.

Six average guys are on a private yacht in the Aegean Sea for who-really-knows-what reason. When a mechanical hiccup leaves them marooned at sea, they choose to wile away the time playing a game of one-upmanship called ‘Chevalier’.

Amid the penis measuring, Ikea furniture assemblage and comparison of cellular ringtones, an insightful and wry unpicking of human male pack behaviour occurs, as well as the revelation of personalities within the pack. But, as one of the participants admits, “Even if you win, it doesn’t mean you’re best in general.”