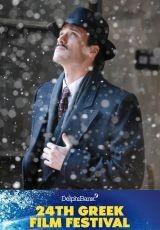 The untold story of Thessaloniki’s Jewish community during the Second World War.

Based on a book by George Skarbadonis, Cloudy Sunday is an epic collision of love and tragedy ¬– fact and fiction – using the soul-stirring music of rebetika legend Vasilis Tsitsanis as its heartbeat.

It is 1942 and Thessaloniki is under Nazi occupation. But even brutal totalitarian oppression cannot stop a young Christian, Yorgos, and Jewish woman, Estrea, from falling in love. They find refuge in a tavern run by Vasilis Tsitsanis (played by GFF 2014 guest and star of Little England, Andreas Konstantinou) at a time when he composed many of his most famous songs, including the titular Cloudy Sunday.

Despite its period setting, Cloudy Sunday acts as a chilling reminder that history will repeat itself if we rest on our laurels and allow ourselves to forget. As Manousos Manousakis admits, “This story reflects current events, where racism and neo-Nazism lie in wait menacingly, eager to infect the global community.”

46,091 Jews from Thessaloniki were deported to concentration camps. Only 1,950 survived.