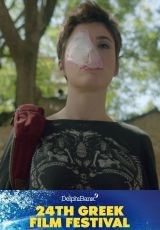 “[This] could be our own, completely made in Greece mumblecore.” Cinepivates

Raw, honest and with an indisputable style of its own, filmmaker Yannis Korres sets the quarter-life crisis of a whole generation of lost souls to film in Kissing? – a story of sex, love, fitting in… and Pierce Brosnan.

Staring down the barrel of their thirties, Danny (Thanassis Petropoulos) and Stella (Iro Bezou) are members of an undefined generation, a generation shaken by the financial crisis at a time they should be prospering and set adrift in its aftermath.

But while the confusion and chaos of the world passes them by, Danny thinks he’s too good for it, Stella thinks it’s not good enough for her and the question remains: Are they good enough for each other?