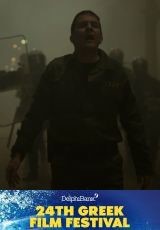 A homeless man, a farmer, a politician, a husband caring for his sick wife, a career woman, a factory owner and the President of Greece himself – seven people with seven very different stories take centre stage in Vassilis Mazomenos’ look at how the Greek economic crisis affected – and continues to affect – those on the frontline.

As the crisis hits, people from all walks of life find their worlds irrevocably changed. A final desperate act connects them all – a phone call to a psychological support centre called Lifeline. As they fall apart, it’s their only hope.

Based on a nightmarish reality, Lines is an apocalyptic drama set in the darkness of a very contemporary climate, where being seen as more than just a number means fighting hopelessly against a broken system.

Winner of the Odysseus Award for Feature Fiction Film at the London Greek Film Festival 2017.