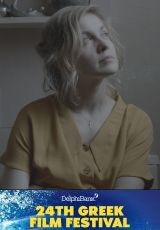 “Contrasting an unsettling childhood reality with the comforting refuge of fantasy.” Screen Daily

Transforming stark realities into the stuff of fairytales, filmmaker Elina Psykou populates this dark world of abandonment, deceit and coming-of-age with bears, beanstalks and all the trappings of classic Brothers Grimm.

Following the death of his father, 11-yr-old Misha (Victor Khomut) arrives in Greece from Russia during the 2004 Athens Olympics to be reunited with his mother, Sofia (Valery Tscheplanowa) after two years apart. But his new life is not what he expected. Sofia is living with Mr Nikos (Thanassis Papageorgiou, My Life in Ruins, GFF 2009), an ex-children’s TV presenter who rules his quirky roost with an iron fist and wants to fill the shoes of Misha’s father.

Escaping through flights of fancy, Misha transforms into his namesake – the Russian Olympic mascot of 1980 – and befriends a Ukrainian teenage gigolo as the real world closes in on him.