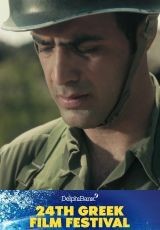 GFF17 The Story of the Green Line

Since when did you become a ‘Turk’ and I a ‘Greek’?

In Cyprus, north and south are separated by a wall of barrels and barbed wire known as the ‘Green Line’ of Nicosia. It is here that two soldiers, Greek-Cypriot Kypros (Michalis Sophocleous) and Turkish-Cypriot Murat (Cihan Tariman), find themselves on guard – face to face on a daily basis – with the weight of history bearing down on them.

When Kypros discovers that Murat is living in his old family home, they propose an exchange, each taking a secret trip to ‘the other side’ – one for love, the other for revenge.

This searing tale of two Cypriots dislocated from home and family comes from the provocative mind of political filmmaker and activist Panicos Chrissanthou, who went on a hunger strike this year in protest of exclusions and discrimination in local cinema.

“Powerful, evoking the horror of neighbours turning on each other in previously-placid mixed villages.” Cyprus Mail