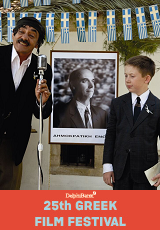 Based on an autobiographical short story by Nikos Papandreou, son of a former Greek prime minister.

This uproarious tale dives into Greek culture with the same unbridled humour as My Big Fat Greek Wedding but with extra realism – it draws its inspiration from George Papandreou’s son.

A prominent Greek politician sends his American-raised 11 year-old son, Alex (Tex Pardue), to Crete to win votes by becoming Godfather to the baby of a local party boss and aspiring parliamentary candidate. Determined to show his father that he’s a worthy scion, Alex’s initiation into the dark arts of the political world sets the plucky youngster on a journey of self-realisation instead. While Alex hilariously negotiates the local customs and eccentricities of Crete, his father’s expectations of him inevitably clash with a normal childhood.

Nominated for Best Feature Film at the 2008 Los Angeles Greek Film Festival, First Time Godfather is the quintessential family comedy – suitable for viewing by children, although its satirical lens into politics will resonate strongly with older audience members.