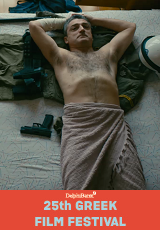 An emotional maelstrom of love clashing with idealism.

Inspired by the Athenian street demonstrations of 2008 captured in his documentary, Children of the Riots (GFF 2012), writer-director Christos Georgiou returns with a fictional exploration of a family on the precipice of being torn apart, as the street violence pits a fiercely political daughter against her policeman father.

While celebrating his birthday with colleagues in their mobile riot truck, policeman Yiorgos (Dimitris Imellos) and his team come under attack from protestors. Amid flying petrol bombs and the unspeakably violent retribution meted out on the demonstrators, Yiorgos finds his daughter, Margarita (Nefeli Kouri), at the epicentre of the chaos.

Determined to keep her family together, household matriarch Sofia (Mirto Alikaki) banishes them to the family’s country home to sort out their differences. But, when Margarita’s radical boyfriend, Konstantinos (Vasilis Magouliotis), arrives and uncovers the identity of her father, she is forced to make the impossible choice between family and the ‘cause’.