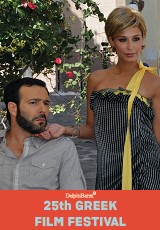 So you’re running from the mob? That’s when a clone comes in handy.

Unconventional science, millions in missing organised crime money and a couple of hit men on a mission combine to create this anarchic comedy farce from celebrated Greek filmmaker Stratos Markidis.

When New Yorker Mike Kanias (Kostas Apostolakis) stops for some cigarettes and, simultaneously, manages to lose $30 million owed to a crime boss, he knows it's only a matter of time before the mob comes looking for him for and the money he doesn’t have.

Mike, however, isn't your average guy – he's the world's first human clone, created in the ‘70s by a group of pioneering scientists. To evade his pursuers, he concocts a scheme to escape to the small Greek village of Karditsa and trade places with the man they cloned him from, Grigoris (Kostas Apostolakis). But, unfortunately, Grigoris is busy dealing with ‘problems’ of his own.