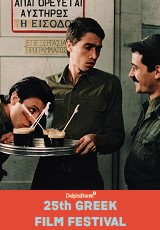 In 1967, an infantryman, Private Ioannis Papadopoulos, is transferred from an outpost on the frigid, snow-bound Greek-Bulgarian border to a unit in Athens, near his wife and his twin daughters – born just before his conscription. When the Greek military junta seizes power, Ioannis becomes part of a group of soldiers assigned to the recently formed Armed Forces Television unit forced to create propaganda for the regime masquerading as civilian content.

A seminal component in the Perakis oeuvre, Loafing and Camouflage has become a cult classic of Greek cinema and a compelling example of how truth can be weirder than fiction. You’ll laugh because you won’t believe it.