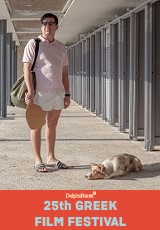 Tapped from the vein of the so-called Greek Weird Wave of cinema – and written by its director with co-scribe of The Lobster and Dogtooth, Efthimis Filippou – Pity depicts a lawyer living a dark existence in a sun-drenched world. His wife is in a coma following an unspecified accident, and he walks around as though in one too, calling on the sympathy of those around him. When she wakes, everything is not okay. The world is not cruel enough for this man.

Famed television comedian Yannis Drakopoulos presents a “canvas of nuanced expressions” in Pity, “ranging from melancholy to jealousy to psychotic, without seemingly moving a brow” (MUBI Notebook). Whereas fixed composition, static camerawork and muted performances have become a hallmark of Greek Weird Wave, they take on new narrative importance here, with the lawyer as emotionally stuck as this film is visually.

It all leads to a catastrophic finale that would make the paragons of Greek tragedy proud.