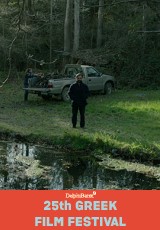 Adonis Florides’ Rosemarie intelligently teeters between comedy and thriller in its telling of a burnt-out soap opera writer taking ‘inspiration’ from his neighbours.

Costas (Yiannis Kokkinos) struggles with a crippling case of writer’s block. Under pressure from his producer to boost the ratings of their television show (the titular Rosemarie), he resorts to spying on his dysfunctional neighbours, weaving their sad lives into the show’s storylines.

As the program’s ratings – and his reliance on his neighbours – grows, so too does Costas’ obsession with the daughter, Chryso (Niovi Charalambous), who persistently runs away from home. As he learns more and more about her story, putting the pieces of her tragic life together, he unwittingly opens a Pandora’s box of his own personal demons.

In its own postmodern, dystopian manner, Rosemarie is a highly entertaining study of the contradictions of modern Cyprus, subversively challenging the patriarchal status quo.