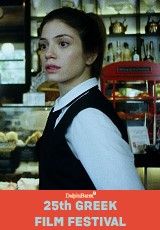 On the cusp of the infamous financial and social crises of the previous decade, author, psychiatrist and budding politician Panagis (Markoulakis) meets the beautiful Georgina (Georgiadi), an actress from a working class background, whose career is primed to take off. As the couple embarks on a tempestuous affair, passion soon devolves into a toxic battle for dominance over the other. And, when Panagis announces a run for political office, the games between he and Georgina take an unexpected twist.

An acerbic parody of bourgeoisie mores, Perakis’ most recent marvel – equal parts thriller, drama and comedy – is a welcome continuation of his fine filmmaking form after a six-year hiatus.