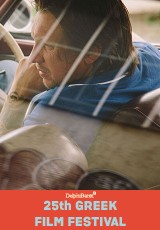 Following a five-minute standing ovation at its world premiere at the Venice Film Festival, Jason Raftopoulos’ stirring West of Sunshine makes it to home screens, most notably those of Melbourne that plays out as a central character across this sprawling day-in-a-life drama.

Separated from his family and caught in a cycle of gambling and debt, Jim (Damian Hill, Pawno) has less than 24 hours to repay a violent loan shark (GFF favourite, Tony Nikolakopoulos). His day is turned upside down when he must look after his young son, Alex (Hill’s real-life step-son, Ty Perhan), who is on school holidays.

When his plans to pay back the loan fail and a desperate last effort puts Alex’s life at risk, Jim must make a choice between his past and a second chance to right past wrongs.

Both Vittorio De Sica’s Bicycle Thieves (1948) and Raftopoulos’ own short, Father’s Day (GFF 2013), are strongly imbued in the father-son dynamic of this film where mishap graduates to even stronger familial ties. A classic tale told with new vivacity.