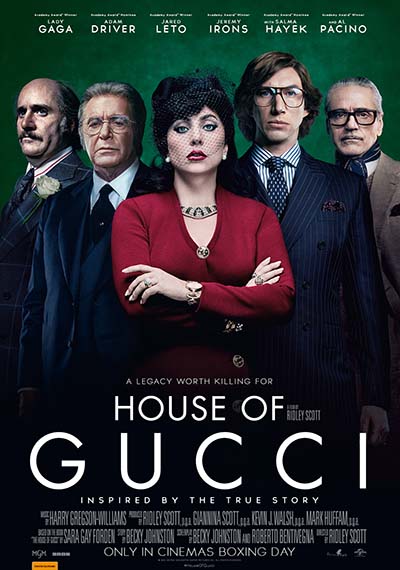 HOUSE OF GUCCI is inspired by the shocking true story of the family empire behind the Italian fashion house of Gucci. When Patrizia Reggiani (Lady Gaga), an outsider from humble beginnings, marries into the Gucci family, her unbridled ambition begins to unravel the family legacy and triggers a reckless spiral of betrayal, decadence, revenge -- and ultimately murder. Spanning three decades we see what a name means, what it’s worth, and how far a family will go for control.

Directed by Ridley Scott (Aliens, Blade Runner, The Last Duel), HOUSE OF GUCCI features stellar performances from Lady Gaga, Adam Driver, Jared Leto, Salma Hayek, and Al Pacino. Gaga is gripping as Reggiani, wrapping you around her jewellery laden finger in a performance that must be seen to be believed. Dress your best and take a behind the scenes look at one of the world’s most powerful families and the events which brought them to the forefront of fashion.

"From start to finish, House Of Gucci is a hoot. "