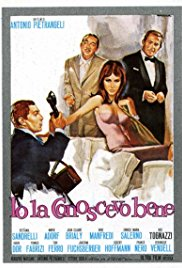 I Knew Her Well

Following the gorgeous, seemingly liberated Adriana (Stefania Sandrelli) as she chases her dreams in the Rome of La Dolce Vita, the film is at once a delightful immersion in the popular music and style of Italy in the sixties and a biting critique of its sexual politics and the culture of celebrity. Over a series of intimate
episodes, just about every one featuring a new man, a new hairstyle, and an outfit to match, the Italian master Antonio Pietrangeli composes a deft, comedic character study that never strays from its complicated central figure. A thrilling rediscovery, by turns funny, tragic, and altogether jaw-dropping.