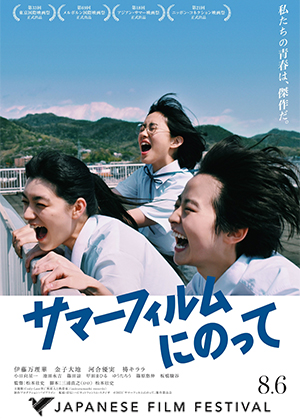 School’s out for summer and a nerdy sci-fi and samurai film fan trio is making Hadashi’s debut, DIY cinematic masterpiece—the ultimate teen tribute to her old school samurai heroes! With her bubbly film club rival in the director’s chair of a cheesy romance film, Hadashi (Barefoot) turns her film fantasies into a battle of honour, samurai-style.

When cute and mysterious Rintarо̄ lands in town Hadashi knows she’s found her leading man after they bond over jidaigeki (period drama) cinema, but he’s camera-shy for a reason! She’ll need to win him over, along with a whole volunteer cast and crew, to realise her vision.

Former idol Marika Itо̄ (Nogizaka46) shines in her leading role as the passionate Hadashi, alongside Daichi Kaneko (Ossan’s Love) as Rintarо̄. From 33-year-old director Takeshi Matsumoto, It’s a Summer Film! is upbeat, energetic, and fun for all ages.