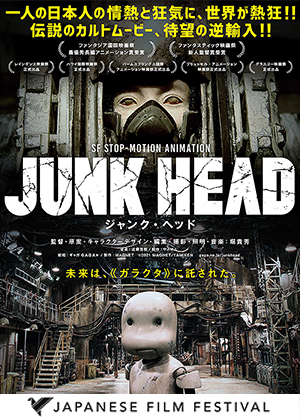 In a distant, dystopian future, the earth has become uninhabitable and humans have lost their fertility as a consequence of genetic manipulation. The protagonist, a lone cyborg explorer, is sent on a mission into the underground world to uncover the secrets of the Marigans–a super artificial life-form with incredible reproductive capabilities. During this perilous descent through a subterranean labyrinth, he encounters both terrifying enemies and loyal allies, before learning about a legendary ‘tree of life’, the only hope left for the future of humanity.

Lauded by director Guillermo del Toro as a ‘work of deranged brilliance’, Takahide Hori’s stop motion animation is a grotesque and surreal masterpiece, resulting from seven years of laborious cinematic work. Even more impressively, director Hori was entirely self-taught and essentially created the film himself–he wrote, directed, sculpted, composed, and even voiced three of the characters. Junk Head’s nihilistic techno-industrial soundtrack pairs perfectly with film’s dark, twisted themes, as well as the humorous appropriation of a classic Nietzschean idea; ‘God is dead and we killed him’.