JFF21: Throw Away your Books, Rally in the Streets 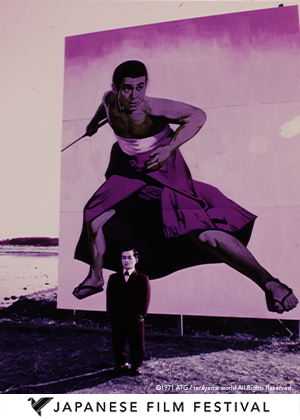 With his first feature-length film, Shūji Terayama presents the provocative and disturbing cinematic adaptation of his celebrated novel and play of the same name. Noise rock and psychedelic vignettes frame the tumultuous society that is home to Hideaki, a dissatisfied, angst-ridden teen dealing with his highly dysfunctional family. In typical Terayama style, the main narrative is interrupted by short sequences introducing various strangers and dialogues, contributing to the poetic portrayal of an anarchistic moment in Japanese history.

Visually breathtaking scenes are contrasted with the violent and bleak sexualisation of women, all captured through the unrelenting male lens. Raw, unsettling camerawork interwoven with music video and documentary-style film techniques are enmeshed with a cacophony of colours, images and sounds—setting the discomforting tone for a stream of consciousness that challenges the audience’s passivity and the consumption of cinema at large.

The film’s synergic oscillation between socioeconomic ferment, romanticised vulgarity, and the relentless struggle for freedom won Terayama the award for best Japanese film of 1971 in the Kinema Junpo poll of film critics, and the grand prize at the 14th San Remo Film Festival.