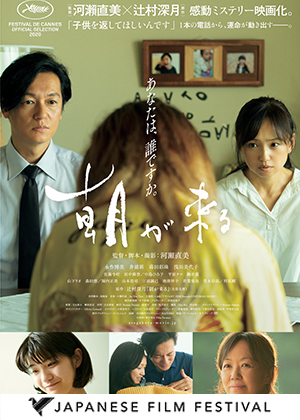 Well-to-do professional couple Satoko (Hiromi Nagasaku, Rebirth) and her husband Kiyokazu (Arata Iura, Ping-Pong) seem to have it all. But in reality, the pair yearn for a child yet struggle to conceive, eventually abandoning any hope of a miracle due to Kiyokazu’s infertility problems. Their faith is suddenly restored when the couple happen upon an adoption agency, and the arrival of baby boy Asato offers them a real chance at parenthood. Six years together go by when they are suddenly confronted by an unfamiliar woman, who claims to be Asato’s birth mother and demands him back.

True Mothers is an emotionally charged drama that combines thoughtful visuals with brilliant storytelling. Critically acclaimed director Naomi Kawase (The Mourning Forest) interweaves her story with delicate, cinematic references to nature to accentuate the undulating experiences of motherhood. In her poignant film adaptation of Mizuki Tsujimura’s novel, Kawase’s work shines a light on those who are most often overlooked in society. With her skillful documentary-style approach, she gently guides two storylines with the utmost respect and tenderness for her characters.