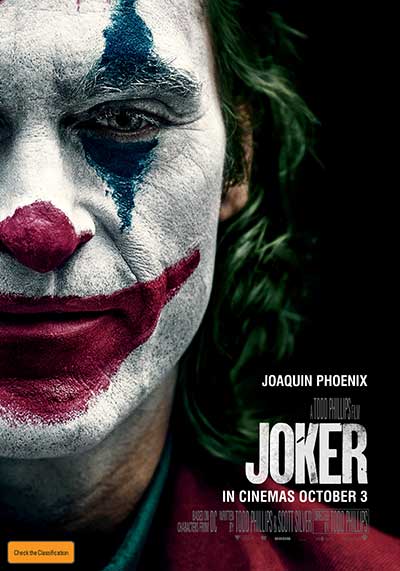 Winner of the Golden Lion at the 2019 Venice Film Festival, JOKER is a critically-adored masterpiece with a tour de force performance from Joaquin Pheonix - a postmodern reflection on comic-book origin stories and villains, and a homage to the great character-study films of the 1970s. Believe us when we say the hype is real, JOKER is set for a magnificent awards season run and will spark conversation for years to come.

Director Todd Phillips “Joker” centers around the iconic arch nemesis and is an original, standalone fictional story not seen before on the big screen. Phillips’ exploration of Arthur Fleck, who is indelibly portrayed by Joaquin Phoenix, is of a man struggling to find his way in Gotham’s fractured society. A clown-for-hire by day, he aspires to be a stand-up comic at night…but finds the joke always seems to be on him. Caught in a cyclical existence between apathy and cruelty, Arthur makes one bad decision that brings about a chain reaction of escalating events in this gritty character study.


"arguably the best social horror film since Get Out - and Joaquin Phoenix is magnetic in it."

"Having brazenly plundered the films of Scorsese, Phillips fashions stolen ingredients into something new, so that what began as a gleeful cosplay session turns progressively more dangerous - and somehow more relevant, too."

"They do not disguise their debt to Martin Scorsese in a film that has clear echoes of The King of Comedy and Taxi Driver, yet Joker is also thrillingly original, with an extraordinary performance by Phoenix at its dark heart. "