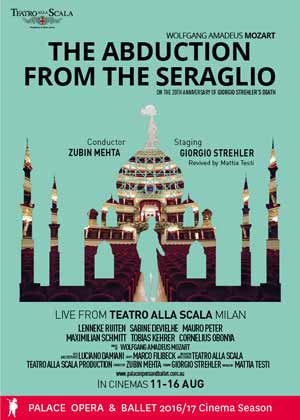 La Scala: THE ABDUCTION FROM THE SERAGLIO

The unforgettable game of silhouettes with which the great director Giorgio Strehler interpreted the charm of Mozart’s Turkish-flavoured singspiel was conceived for the Salzburg Festival, where it was staged in 1965 under the baton of Zubin Mehta, and then regularly revived at La Scala from 1972. On the 20th Anniversary of Strehler’s death, La Scala stages his celebrated production anew, recalling to the podium the man who conducted it the first time. Captured live at Teatro all Scala Milan, 19 Jun 2017.