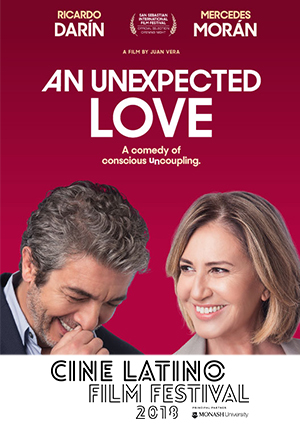 Direct from the 2018 San Sebastian Film Festival (where it premiered as the Opening Night Gala), this smart, funny and hugely entertaining romantic comedy hit stars the wonderful Ricardo Darín and Mercedes Morán, and tells the story of a long-married couple who begin to question the true meaning of love and desire after becoming empty-nesters.

When Ana (Morán, Neruda) and Marco (Darín, Truman, Wild Tales) arrive at the airport to farewell their son who is leaving his Argentine homeland to study abroad, they are filled with certainty that they’ve done well as parents. However his departure leaves a significant hole in their everyday lives, and after more than twenty years of marriage, both come to admit that their feelings for each other have shifted. So as if it were one last project together, Ana and Marco decide to ‘consciously uncouple’, and begin to explore the surprising and sometimes wonderful world of the newly-single, to hilarious and unexpected results.

This superb showcase for its two leads unsurprisingly stormed the Latin box office in August, becoming one of the biggest films of the year. Intelligent and perceptive, it’s a total delight to experience.