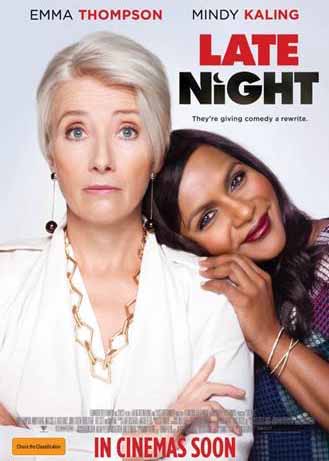 A topical workplace comedy with a lot of heart, laughs and smarts, brought to life by a terrific cast, including the always brilliant Emma Thompson and writer/star Mindy Kaling.

Katherine Newbury Thompson) is a pioneer and legendary host on the late-night talk-show circuit. When she’s accused of being a “woman who hates women,” she puts affirmative action on the to-do list, and-presto!-Molly (Kaling) is hired as the one woman in Katherine’s all-male writers’ room. But Molly might be too little too late, as the formidable Katherine also faces the reality of low ratings and a network that wants to replace her. Molly, wanting to prove she’s not simply a diversity hire who’s disrupting the comfort of the brotherhood, is determined to help Katherine by revitalizing her show and career-and possibly effect even bigger change at the same time.


"Humor can be a great equalizer, and Thompson and Kaling are terrific as two women who are funny as hell and should never be underestimated."

"Mindy Kaling makes vicious observations about the inanity, narcissism and corruption of the mainstream US media at the same time as she celebrates the professionalism of many of those who work within it. "

"Like all comedians worth their salt, Kaling sets out to kill - but with kindness."