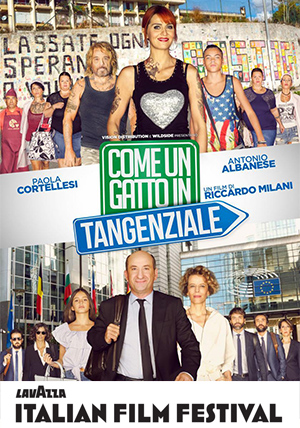 The winner of Best Comedy, Actress and Actor at the 2018 Nastri d’Argento Awards, Like a Cat on a Highway, is a hilarious tale of two parents who come from different worlds united by a single cause: to stop their 13-year-old children from dating each other!

Giovanni (Antonio Albanese, A Lonely Hero LIFF14) and Monica (Paola Cortellesi, The Last Will Be the Last LIFF16) live completely opposite lives. He is a wealthy idealist living in the centre of Rome, and is a prophet of social integration. Monica is a pragmatist and an ex-supermarket-checkout girl, living with the everyday social challenges in Rome’s suburbs. They would never have met if their children did not get together. But now, the two have a common goal: the relationship between their children, which has the life expectancy of a cat on a highway, must end!

The most popular local film in Italy last year – with over 1.5 million cinema admissions – this smash-hit comedy from the director of Do You See Me (LIFF15) takes you to unexpected places as Giovanni and Monica, through their newly formed friendship, start to see their worlds from a different point of view.