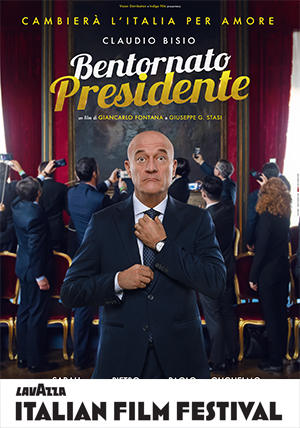 This sequel to the box-office smash hit of 2013 sees Giuseppe Peppino Garibaldi (a loveable Claudio Bisio) again facing the challenge of living up to his name!

Peppino, a provincial librarian who became the accidental President of Italy, is now a father and has returned to a peaceful, happy life as a woodsman. That is, until his wife Janis (Sarah Felberbaum, I’m Not a Killer (LIFF19) decides to return to politics. Peppino is forced to abandon his home in the mountains and return to Rome to win back his love and help her defeat a speculative plot intended to damage Italy. Together, they must fight against social media attacks of the opposition and get the country back on its feet.

With this light-hearted and witty portrait of Italian politics, director duo Giancarlo Fontana and Giuseppe G. Stasi playfully cast a satirical eye over the animosity being fostered by traditional and social media in the current political climate with hilarious results.