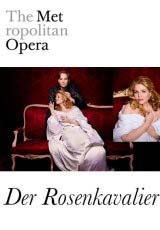 The Met’s first new production since 1969 of Strauss’s rich romantic masterpiece will be conducted by Music Director James Levine and directed by Robert Carsen, whose most recent Met production was the hit 2013 staging of Falstaff.

Renée Fleming will sing one of her signature roles as the Marschallin, opposite Elīna Garanča in her first North American performances as Octavian, the impulsive young title character. The cast also includes Günther Groissböck as Baron Ochs, Erin Morley as Sophie, Marcus Brück in his Met debut as Faninal, and Matthew Polenzani as the Italian Singer. Der Rosenkavalier is a co-production with the Royal Opera House, Covent Garden, and Teatro Regio di Torino.