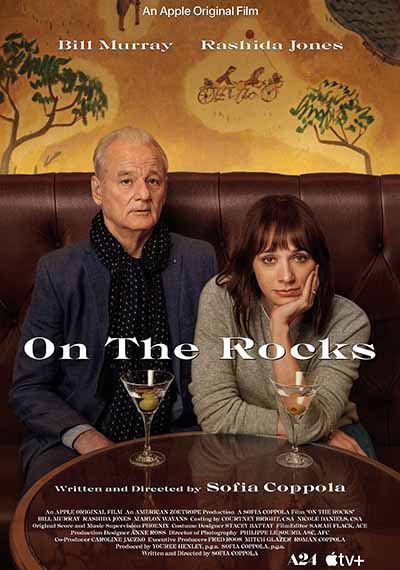 Palace Cinemas is delighted to announce that acclaimed Academy Award-nominated director, Sofia Coppola, will have her latest film ON THE ROCKS premiere theatrically in Australia at Palace Cinemas, the film sees the long awaited reunion of the director with actor Bill Murray, who starred in her Academy Award-winning 2003 Film, LOST IN TRANSLATION.

A young New York mother (Rashida Jones) faced with sudden doubts about her marriage teams up with her larger-than-life playboy father (Murray) to tail her husband (Marlon Wayans). What follows is a sparkling comic adventure across the city – drawing father and daughter closer together despite one detour after another. Coppola brings a light touch to this blend of an exuberant love letter to New York, a generation-clash comedy about how we see relationships differently from our parents, and a funny celebration of the complications that bind modern families even as they tie us in crazy knots.

The highly-anticipated comedy-drama will be the first theatrical collaboration between Coppola and Murray in the 17 years since LOST IN TRANSLATION, which won Coppola the Academy Award for Best Original Screenplay and nabbed nominations for Best Picture, Best Director, and Best Actor for Murray.

"Jones and Murray... achieve the kind of effortless rapport that spawns “I want them to go solve mysteries” memes, and the key ingredient of that chemistry is that Jones never allows Murray to steal the show."

"On the Rocks is very much a father-daughter two-hander — tender and personal, dryly funny and played to perfection by Jones and Murray."

"On the Rocks turns into a boozy humanistic hang-out caper movie, one that’s light-spirited and compelling, mordantly alive to the ins and outs of marriage, and a winning showcase for Murray’s aging-like-fine-whisky brand of world-weary deviltry."