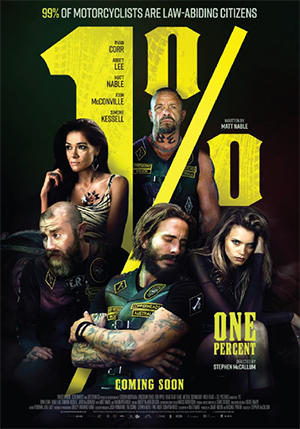 While Knuck has been in prison, his surrogate son, Mark, nicknamed "Paddo" has minded the store. Paddo has modernized the activities of the club, expanded their enterprise, and brought in new members — all endeavours that threaten Knuck's position on his return. Both men are supported and influenced by their equally strong wives, each woman as rabidly ambitious for her husband as for herself. Tensions mount when Paddo's younger brother, Skink, creates a problem for the club, and Paddo must choose between familial devotion or loyalty to Knuck and the club he heads. Well-paced, intense, and often violently confrontational, 1% is a powerful new depiction of an old story. A fading lion, out of step with the times, rages against a new regime unwilling to cede to a new generation — right up until the final, chilling shot.