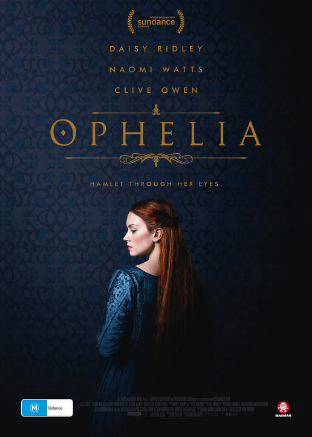 Based on the award-winning novel by Lisa Klein, OPHELIA is a dynamic re-imagining of Shakespeare’s Hamlet told from an unexpected point of view. Set in the 14th century but spoken in a contemporary voice, Ophelia takes center stage in the untold story of her tragic romance with Hamlet and her relationship with his mother, Queen Gertrude (Naomi Watts). A wild and motherless child, Ophelia (Daisy Ridley) is taken into Elsinore Castle under the wing of Queen Gertrude and becomes her most trusted lady-in-waiting. Growing into a beautiful and intelligent young woman, she soon captures the attention of the handsome Prince Hamlet (George MacKay). While she learns the ways of power and plotting in court, an undeniable love between Ophelia and the Prince blossoms in secret. As war brews with a neighboring kingdom, lust and betrayal are tearing Elsinore apart from within – the King has been murdered, driving Prince Hamlet into a downward spiral of vengeful torment. Ophelia must decide between her true love or her own life and devises a plan to escape Elsinore forever, in order to protect a very dangerous secret.