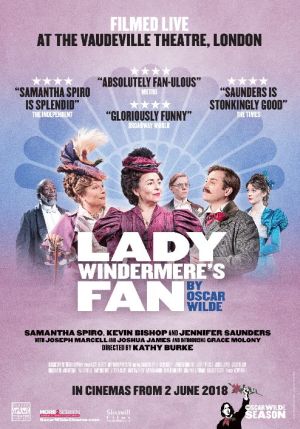 Kathy Burke brings together a talented comedic cast including the Olivier Award winning actress Samantha Spiro as Mrs Erlynne, Kevin Bishop as Lord Darlington and Jennifer Saunders as the Duchess of Berwick, making her return to the West End stage for the first time in over twenty years.

The day of Lady Windermere’s birthday party, and all is perfectly in order. Until her friend Lord Darlington plants a seed of suspicion. Is her husband having an affair? And will the other woman really attend the party? First performed in 1892, Lady Windermere’s Fan explores the ambiguity of upper class morality and the fragile position of women in society in the late Victorian era in one of Wilde’s most popular and witty plays.