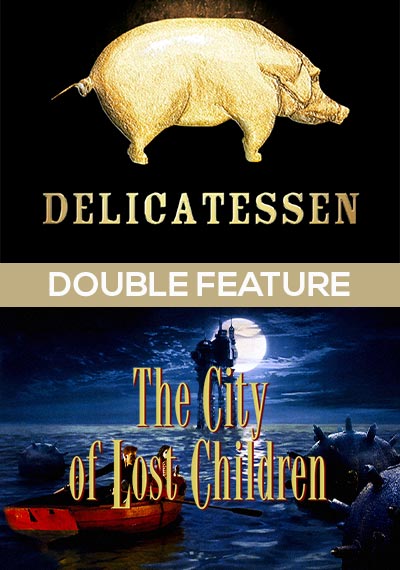 DELICATESSEN: Clapet (Jean-Claude Dreyfus) is a butcher who owns a run-down apartment building in post-apocalyptic France. The building is in constant need of a handyman, because Clapet routinely butchers them and sells them as food. The latest in the long ling of disposable workers is Louison (Dominique Pinon), a former circus clown desperate for work and lodging. But this time Clapet's plan hits a snag when his young daughter (Marie-Laure Dougnac) falls head over heels for the lovable Louison.

THE CITY OF LOST CHILDREN: Old and decrepit Krank (Daniel Emilfork) has lost his capacity for dreaming and is attempting to fight death by stealing the dreams of children. Krank's cadre of cloned henchmen (Dominique Pinon) snatch 5-year-old Denree (Joseph Lucien) to subject him to the horrific dream-retrieval process. The boy's father, One (Ron Perlman), the hulking strongman of a traveling circus, and his precocious 9-year-old friend, Miette (Judith Vittet), join forces to defeat Krank's minions and save Denree.