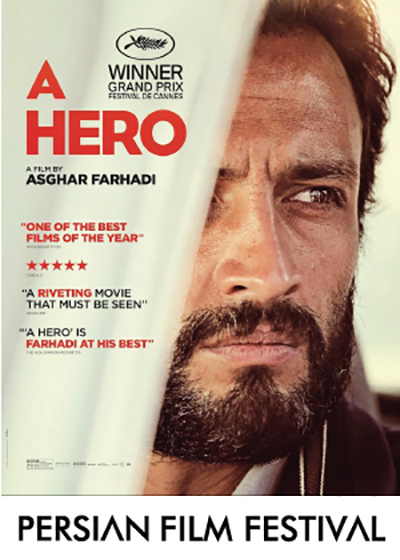 From the celebrated and award-winning Iranian director Asghar Farhadi (A Separation, The Salesman, Best Foreign Language Film Oscar Winner 2012 & 2017) comes A Hero, screening for a special limited preview season presented by the Persian Film Festival. A Hero has already received widespread critical acclaim, having been awarded both the Grand Prix & François Chalais Prize at the 2021 Cannes Film Festival. The film has also been selected as Iran’s official submission for the 94th Academy Awards Best International Feature film category, boasting a remarkable 100% approval aggregate on Rotten Tomatoes.

Farhadi’s A Hero is a compelling and soulful reflection on the morality of crime, telling the story of Rahim, a man in jail on account of unpaid debts. Whilst on a two-day release he and the woman he loves hatch a plan to convince his creditor to drop the charges. However, his plans quickly spiral out of control when he gains unwelcome notoriety on social media. In efforts to restore his reputation and familial relationships, Rahim must grapple with representations of innocence and guilt in the court of public opinion.

Farhardi’s latest is superb and exquisitely complex, featuring upstanding performances from Amir Jadidi (Zero Day) and Mohsen Tanabandeh (The Oath), A Hero is a must-see masterpiece of cinema.


"A superb morality play that immerses us deeply in a society's values and rituals and keeps us guessing right to its powerful final shot. "

"In Mr. Farhadi's hands it's a deliciously ironic, exquisitely complex and mysteriously stirring tale of a man, his son and family, and the staining of multiple reputations by what seems, at the outset, to be a fairly minor lie. "