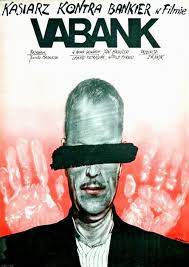 To celebrate the 40th anniversary of its release, join us to watch on the big screen the cult heist movie “Vabank”, one of the best and most popular Polish comedies. Set in the criminal underworld of 1930’s Warsaw, it tells the story of charming bank robber Henryk Kwinto, who upon leaving prison decides to take sweet revenge on his former partner, Gustaw Kramer, responsible for Kwinto’s incarceration. Not only does he come up with a clever plan to rob Kramer’s famous and well protected bank, but also makes it look like the culprit is Kramer himself. From the the director of smash hits such as Sex Mission and Kiler, Vabank was the directorial debut of Juliusz Machulski, made shortly after graduating from the Łodź Film School.