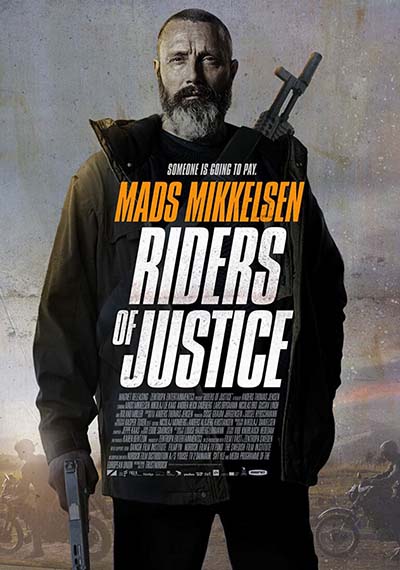 An ingenious, pitch-black Scandi revenge comedy Mads Mikkelsen (Another Round, Hannibal) reunites with Anders Thomas Jensen (Adam’s Apples), the acclaimed screenwriter of In a Better World, Brothers & After the Wedding. Riders of justice is a wittily plotted, gun-happy tale of risk, fate, grief and parenthood –fans of the Coen brothers and Scandinavian noir are in for a treat.

Career soldier Markus (Mikkelsen) cuts short his deployment to care for his teenage daughter, Mathilde after his wife is killed in a train crash. But then he has visitors: a fretful statistician and his hacker friends, who believe the crash was no accident – according to their calculations, it was masterminded by the outlaw bikie gang Riders of Justice to silence a witness who was about to testify against them. The PTSD-afflicted Markus needs no further excuse to unleash his very particular set of skills, but can he hide his vigilante campaign from Mathilde?

"Salty, violent, transgressive, button-pushing, non-PC and laugh-out-loud funny at times – and when you’re not gasping or laughing, it’s only to wonder at the mind which pulled all of this together."