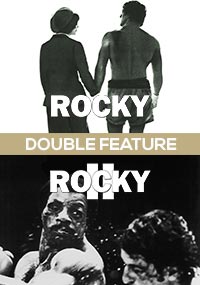 ROCKY (1976):
It's the film that inspired a nation and won Oscars® for Best Picture and Best Director (John G. Avildsen)! Audiences everywhere cheered this American success story of an "everyman" triumphing over all odds. As boxer Rocky Balboa, Sylvester Stallone comes out swinging with heart, humour and unforgettable power as he "goes the distance" against
World Heavyweight Champion Apollo Creed (Carl Weathers) in this unforgettable film! Talia Shire, Burt Young and Burgess Meredith co-star.

ROCKY II (1979):
It's the rematch of the century as Rocky takes on Apollo Creed in this powerful follow-up to one of the most acclaimed movies in film history. After club fighter Rocky Balboa (Sylvester Stallone) goes the distance with the world heavyweight champion, boxing fans clamour for a rematch. But Rocky, having sustained massive injuries in the bout, announces his retirement. Though he tries to make a new life, Rocky realises he can't escape his true calling and must prepare for the fight of his life!