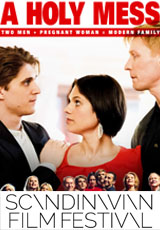 This warm comedy about the modern family stars comedian Robert Gustafsson (The 100-Year-Old Man, Festival opening night, 2015) and premiered in Sweden last November with the highest weekend admissions of 2015.
Partners Simon (Anastasios Soulis) and Oscar (Anton Lundqvist), both in their 20s, have been a couple for three years. Together with their girlfriend, Cissi (Rakel Wärmländer), they have bought a house outside Stockholm. The place needs renovating, but one room has top priority: the nursery, because Cissi is nine months pregnant. But who is the father – Simon or Oscar? Either way, they are going to start a family. They haven’t revealed the secret to their families yet, but realise that they cannot keep it hidden anymore. So what better time to disclose the truth than Christmas night – the feast of tolerance, the day when everybody must love and be kind to one another... Their announcement results in reactions and consequences sure to entertain, as it depicts the new alternative household and how different family situations and relationships never fail to come to a head during the festive period.