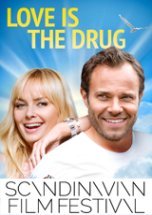 SCA16 Love is the Drug

Gorgeous former Bond girl Izabella Scorupco (Golden Eye, 2009) plays Veronica, who falls head over heels for the handsome Mike (David Hellenius), a carpenter who is rebuilding the kitchen in her plush high-end apartment. The sawdust has barely landed on the floor before their first passionate kiss. However, the teenage kids Fanny and Alexander are not pleased and have a hard time accepting the union. Veronica decides that a summer holiday nearby her wealthy parents on the west coast of Sweden is exactly what they all need. Mike, on the other hand, is not so relaxed in these upper-class surroundings. Furthermore, when his own dysfunctional family becomes involved, Mike and Veronica’s relationship is up for a serious challenge.

An ensemble of eccentric characters and awkward situations make this film hilarious as it is charming, as the class-conflict chaos threatens to bring the new couple’s fairytale to an end