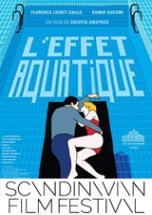 SCA16 The Together Project

Heavy on Icelandic comic sensibilities and imbued with feel-good flavour is the posthumous release from beloved Icelandic filmmaker Sólveig Anspach (Haut les coeurs, 1999) – a film for lovers and fans of breezy cinematic fare.

An awkwardly handsome crane driver, Samir (Samir Guesmi), falls hopelessly in love with Agathe (Florence Loiret Caille) after spotting her in a café. When he learns she teaches swimming at a nearby pool, he concocts a plan to woo her by taking lessons, despite already knowing how to swim.

Agathe uncovers his scam, and his romantic aspirations crash and burn. Undeterred, Samir poses as the Israeli delegate at an Icelandic lifesaving conference (who would have thought swimming pools were so vital to the Israeli-Palestinian peace process!) to finally convince Agathe he is not just another ‘player’.

While The Together Project - also known as The Aquatic Effect - concludes Anspach’s trilogy of comedies (following Back Soon and Queen of Montreuil) enjoyment of this film is not contingent on having viewed the others – each functions entirely as its own stand-alone feature.