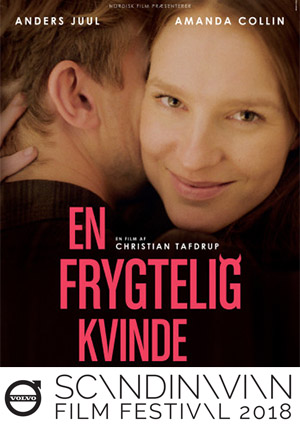 With her wide-eyed, diabolical smile, Amanda Collin gives a tour-de-force performance as the controlling and manipulative girlfriend Marie in the new comedy from the writer/director of Parents (Scandi FF 2016).

Winning Best Actress and Best Original Screenplay at the 2018 Danish Academy Awards, this clever comedy explores a dysfunctional relationship – but from the point of view of the boyfriend. When the affable, weak-willed Rasmus (Anders Juul, Borgen) meets Marie at a party, he’s instantly drawn to her and in no time they’ve progressed from acquaintances to lovers. After all, Marie is a beautiful, intelligent and funny woman. But it’s not long until Marie reveals her true nature. Is she maybe not the dream woman he thought she was, but a possessive and manipulative nightmare? That's at least what it looks like from Rasmus's perspective.

But is Marie the horrible one, or is Rasmus’s complacency causing his own despair? Brilliantly edited by Nicolaj Monberg, who lets every passive aggressive encroachment hang in the air for the perfectly excruciating amount of time, this Danish box-office hit just might be the best – or worst – date night film this festival.