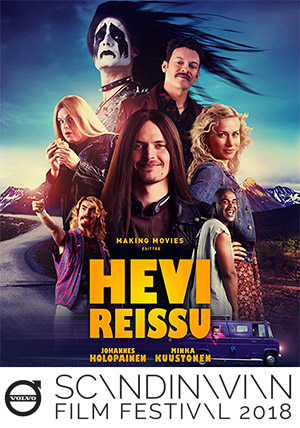 25-year-old musician, Turo, is stuck in his small North Finland town. The only source of enjoyment in his life is his band - ‘Impaled Rektum’ - a band that has spent 12 years rehearsing covers in a basement without actually writing a song or playing an actual gig. Meanwhile, Turo must compete with the smarmy local lounge singer for the affections of Miia, who works in the local flower shop, while dodging taunts and threats from other villagers, including Miia’s intimidating policeman father.

So when fate intervenes with a visit from the promoter of one of Norway’s biggest metal festivals who offers them a slot in the line-up, the guys decide that it’s now or never. They steal a van and flee to Norway in a road trip that will involve heavy metal, grave robbing, Viking heaven, and an armed conflict between Finland and Norway.

This story of small-town dreams was the first ever Finnish comedy to be selected for SXSW, and a screaming blast from beginning to end.