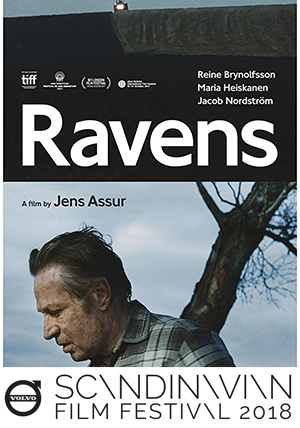 A hardworking farmer begins to crack under the weight of his harsh daily existence and the indifference of his son to their traditional way of life, in Jens Assur’s debut feature. Propelled by a stark, sometimes terrifying beauty, Ravens, explores the trials faced by farmers desperately clinging to tradition in the face of social and technological change.

At the heart of the film is the relationship between a father, Agne, and his son, Klas. Agne fully expects Klas to take over the family farm, but it's evident to almost everyone else that the son has no appetite for farming’s harsh life. His parents have imbued an almost religious significance to their hardscrabble existence, viewing their own sacrifices as a commitment so fundamental to their existence that future generations are obligated to follow their legacy. As hardships (both economic and physical) mount, the pent-up, permanently infuriated Agne begins to question how he's spent his years and what it might mean if even his children reject the livelihood he has devoted himself to.

Made with remarkable precision and an extraordinary eye for detail, Ravens examines how we can embrace - and even become consumed by - the destinies we once shrank from.