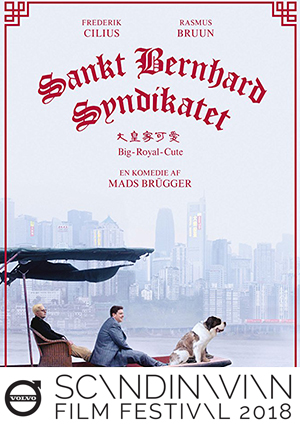 One man’s slobbering hound is another man’s exciting business opportunity in The Saint Bernard Syndicate, a semi-scripted cross-cultural comedy, following two awkward European entrepreneurs who set out on an adventure to build a breeding centre for Saint Bernard dogs in China to expected great fortune.

Rasmus has been given some dire news: He has amyotrophic lateral sclerosis, or A.L.S., and it won’t be long before his muscles give out. Fortunately, he’s just received an offer from a school acquaintance, Frederik, that’ll allow him to live life to the fullest, in his own unique way. The duo (with a loveable 225lb. Saint Bernard in tow) head to Chongqing, China to sell Saint Bernard dogs to the country’s middle-class. The only catch: The world’s fastest-growing marketplace isn’t as easy to navigate as the two hapless Danes might have wished.