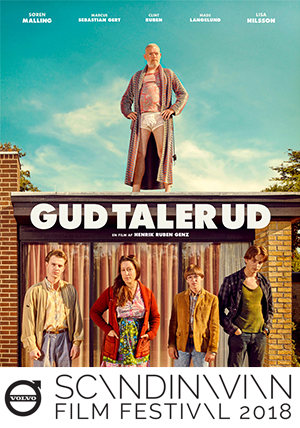 Changes threaten the peace in a 1980s suburban Danish household when the family’s patriarch and self-appointed “God” sets out to write his memoirs, in this wryly comedic film adaptation of Jens Blendstrup's 2004 best-selling autobiography.

It’s 1986, months after the Chernobyl disaster. With nuclear fall-out weighing heavily on his mind, teenage poet Jens could do with a break from his family. His domineering father Uffe (also known as "God"), an erstwhile writer and now self-styled psychologist, rules the roost in his dressing gown and underwear – hosting seriously weird therapy sessions in the living room. But when God gets bowled a medical bombshell and decides to write his memoirs, a fresh circle of hell breaks loose. As insurrection smoulders on the part of Jens and his two brothers, their mother Gerd Lillian (Swedish singer Lisa Nilsson) does all she can to keep the family together. But for Jens, Thomas and Mikkel to break free of their father's tyrannical rule, a showdown with God is inevitable.