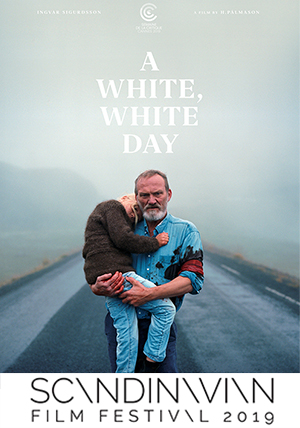 Screening direct from Cannes, where it was the overwhelming Scandinavian success story of the festival, writer/director Hlynur Pálmason confirms the considerable promise of his multi award-winning debut Winter Brothers with this spellbinding and darkly humorous new drama about a stoic grandfather whose emotional reserves are pushed to their limits.

Former police chief Ingimundur (Ingvar E. Sigurdsson) has struggled ever since he lost his wife to a tragic accident two years earlier. Busying himself with the task of renovating a homestead in the remote Icelandic wilderness, he finds solace in time spent with his spirited young granddaughter Salka (Ída Mekkín Hlynsdóttir). But when Ingimundur begins to suspect a local man may have had an affair with his late wife, his detective instincts kick in, fuelling behaviour that becomes increasingly unpredictable…
Anchored by Ingvar E. Sigurdsson’s towering, white-hot lead performance, a visceral score from Edmund Finnis and utterly breathtaking cinematography, Pálmason’s gripping and powerful tale of unconditional love is an unforgettable big-screen experience that is not to be missed.