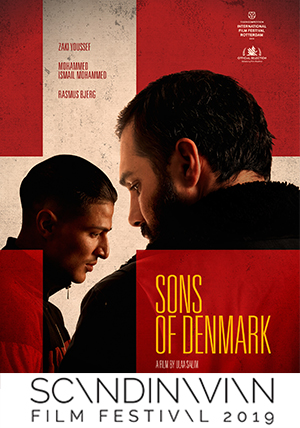 Nominated for best Nordic film at the 2019 Göteborg Film Festival, rising talent Ulaa Salim’s first feature is both a study and a warning of what might happen when different forms of extremism collide.
After a future Denmark is rocked by a terrorist attack, populist politician Martin Nordahl’s xenophobic, Islamophobic rhetoric threatens to win him the elections, and the country rapidly descends into a situation likely to trigger civil war. In this climate, 19-year-old Zakaria leaves his family and becomes involved in a radical organisation, where he forms a bond with Ali. Unable to agree with the current state of the country, which is turning on its own citizens because of their migration background, the two men decide to act. In their attempt to make their mark, their brotherhood will be tested and their actions will have grave consequences on their lives.
With a permanently claustrophobic atmosphere emphasised by the plethora of night-time shots, this presents a chilling hypothetical future and a provocative interpretation of current political circumstances around the world.